I live about one mile from the famous suspension bridge that links Tacoma to Gig Harbor. There is of course a story behind it that makes it famous. Back in 1940, the first span was completed, ending the ferry ride to get to Gig Harbor, or a two hour drive around the south end of the Puget Sound. The bridge is located at the Tacoma Narrows, where the inland sea called the Puget Sound narrows to only one mile across. The bridge is about 300 feet above the Sound, to allow for major shipping traffic to pass under on their way to the Port of Olympia. The bridge became known as Galloping Gertie because it moved in the wind. This was a consequence of an engineer deciding that the deep treselled porus sides could be replaced with a narrow solid ribbon of steel to save money. You probably saw a movie of it in grade 9 science class. If not, it is linked below. Eight hours of oscillations in a (moderate) 42 mile an hour wind brought the bridge crashing down, only 4 months after it opened. Back to ferry traffic because WW2 was in process and large infrastructure projects were not happening. It would be another 10 years before the bridge could re-open.

Best part of the story: An insurance salesman sold an insurance policy on the bridge, which cost the state $10,000. That salesman pocketed the money instead of passing it along to the insurance company he represented. What could happen right? He went to jail for one year for this fraud. And the bridge had no insurance. He was out of jail for 9 years before the bridge was complete again.

The old bridge forms one of the worlds largest man made reefs and it lies under 350' of furious tidal current. The wreckage is protected by the National Register of Historic Places. Legend has it that this is home to a giant octopus. They do exist way down there. One day, we think she'll come back for the two new bridges that were put up above her home. and our "Made in Gig Harbor" Logo foretells her return. 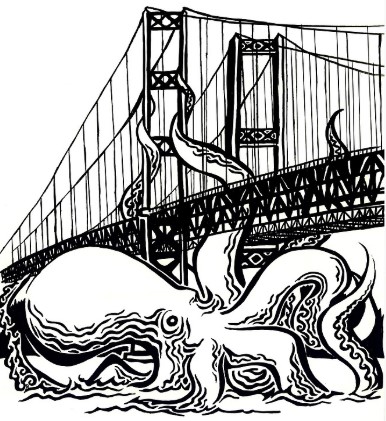